Addressing the Root Causes of Domestic Violence with WEAVE 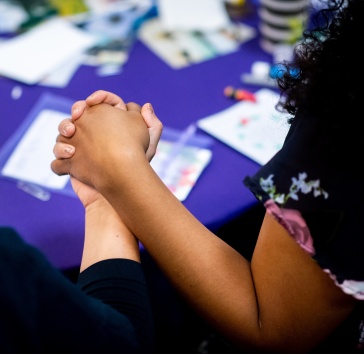 Communities in Sacramento County were faced with a staggering reality – African-American children had disproportionately high death rates from all causes, including child abuse and neglect. According to a Sacramento County Blue Ribbon Commission report, 30 percent of child abuse and neglect deaths were among African American children, and equally startling, in 67 percent of those cases, the families had known risk factors, which demonstrates the tragic consequences of missed prevention opportunities.

At the same time, WEAVE Inc., a Sacramento-based provider of crisis intervention services for survivors of domestic violence and sexual assault had witnessed how African-American clients were overrepresented in the crisis services it provided – like safe shelter – as well as agency provided mandated services through child protective services, but were nearly absent from its preventative services. Beth Hassett, CEO of WEAVE, recounted how for many years previously, its efforts were only going to go so far.

“We needed a bigger community rally if we want to move the needle in preventing domestic violence and sexual assault,” she said.

The National Resource Center on Domestic Violence cites a 30 percent to 60 percent overlap between violence against children and violence against women in the same families. In addition, a Prevention Institute report, which was supported by Blue Shield of California Foundation, found that disparities in rates of domestic violence correspond with inequities based on race, ethnicity, socioeconomic status, gender and other social factors. When combined with systems that yield disparate outcomes for African American families, their children are at even higher risk.  These are connections that WEAVE has long recognized. Hassett saw an opportunity for the organization to make an impact, working with key communities in predominantly African-American community in South Sacramento to leverage community strength to end the cycles of violence.

Such a program requires trust and forming relationships with leaders and organizations that are based in the communities they’re targeting, Hassett said. She recounted listening to community workers in South Sacramento resource centers, telling her: “Something is broken here. We’re not offering what this community needs,” she recalls. “They’re telling us that what we’re doing doesn’t resonate with communities of color.”

Recognizing that culturally sensitive outreach, education and preventative efforts was needed, Hassett said “it’s not about how WEAVE can just go in and fix things,” she said, but instead about “learning and exploring and listening to what will work.”

With this in mind, WEAVE is collaborating with community leaders, health care providers, and grass roots organizations in South Sacramento to examine the root causes of sexual and domestic violence and developing prevention and intervention strategies responsive to the needs of the county’s African-American community.

Funding from the Foundation

To support these efforts, WEAVE was awarded grant funding in December 2018 from Blue Shield of California Foundation, and is part of the Foundation’s work to address the root causes of domestic violence through multi-sector, collaborative solutions.

In addition to WEAVE, five additional recipients of the funding include: South Bay Community Services in San Diego County, to address the personal and systemic causes of domestic violence; Alliance for Community Transformations, to address cultural norms specific to the Hmong community; City and County of San Francisco, which will use the grant to form the Bayview Anti-Abuse Coalition; Contra Costa County, which will focus on expanding engagement of other sectors in domestic violence prevention; and the Public Health Institute, which will engage agencies in California’s far north counties in prevention.

Ending domestic violence has been a foundation priority since 2002. In this latest grantmaking round, the foundation awarded $2.4 million to six projects spread throughout the state, reaching a geographically, culturally and socioeconomically diverse California population.

“Domestic violence is sometimes viewed as a personal or private problem. In reality, it affects every California community, so it is a shared problem, which we can only solve when we put our heads and hearts together,” said Peter Long, Ph.D., president and chief executive officer of the Foundation.

Such community efforts and collaborations have been employed previously by WEAVE. Hassett points to its work with Native American community organizations. Also supported by Blue Shield of California Foundation funding, WEAVE embedded staff at the Sacramento Native American Health Center to provide domestic violence screening and improve the overall climate for victims. The partnership created improvement to WEAVE’s services, as well, resulting in more welcoming and culturally responsive programs for American Indian and Alaskan Native survivors.

But culturally specific responses didn’t stop there. “We realized staff needs to be visible; the services needed to look different and it needed to be customized to that community,” said Hassett. She also cited the organization’s work with the Hmong community, where Hmong staff have attended social gatherings like sewing circles.  “It’s been a year and half and finally we had our first woman come forward who said, ‘I left my husband and I need help’ and we were able to rally around her,” explained Hassett.

WEAVE Joins With Partners, Just One of Many Programs

In this latest effort in South Sacramento, Hassett identifies partners involved in the Black Child Legacy Campaign as some its most important alliances, in particular, the South Sacramento Christian Center in Valley High and the Rose Family Creative Empowerment Center in Meadowview. With staff embedded in resource centers, Hassett already sees trust and enthusiasm building between them. There’s also school district involvement, engagement with businesses via the Sacramento Black Chamber of Commerce, and outreach to apartment complexes that have support services in these neighborhoods.

“We’re very focused on working with communities to change systems so they can truly support people’s needs,” said Long. “To end domestic violence, we need better data, new research, access to best practices and a fuller understanding of its complex origins. We’re supporting efforts to remove the barriers in domestic violence systems that limit services to people in crisis; and we’re strengthening and helping to develop systems and initiatives that prevent violence from occurring in the lives of both children and adults.”The rest of the Foundation’s grantees are taking different, but still, multifaceted approaches, representing collaborations between healthcare, workforce development, community organizing, education, and social services, aimed at addressing the complex dynamics that enable domestic violence—from gender roles to limited economic mobility.

A Foundation-sponsored survey of Californians views on gender and domestic violence revealed that most Californians were personally touched by domestic violence. More than half surveyed (58%) said they have either been a victim or an abuser or have a friend/family member who is one; with roughly one-quarter (23%) having been a victim. Thirty percent say they know a family member or friend who has been an abuser.

While these statistics demonstrate a widespread problem, Long expresses confidence that the Foundation’s funding efforts will result in long-term changes for the better.

“We have a great track record, outstanding partnerships in the domestic violence field, a bold strategy and an unwavering commitment to make sure that California has the lowest rates of domestic violence nationwide within the next 10 years,” said Long.