From Boys to Men - Lessons Along the Way 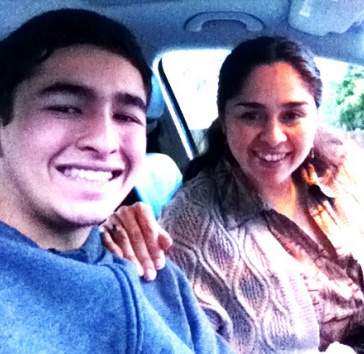 February is Teen Dating Violence Awareness Month. It presents a great opportunity for parents to talk about healthy relationships with their teenagers - both boys and girls.  Most people naturally think of young women when they hear common statistics about teen dating violence. For me, I also think of young men. As a mother of three boys, and a professional working in the field of domestic violence, I know that males are sometimes perpetrators, and sometimes victims, but – most importantly – they are 50% responsible for creating healthy relationships.

A few years ago, one of my sons learned about an incident at his school. What started as a truth-or-dare joke led to a teenage girl slapping a boy in her class, who then responded by slapping her back. Needless to say, the event prompted a lively discussion over dinner that evening. Gathered around the table, I heard a variety of opinions. Since it wasn’t a bullying scenario, but more of a tete-a-tete, I found it difficult to navigate the conversation and come up with the right response. I argued that while it was not OK for the girl to strike the boy, it was definitely not OK for the boy to hit the girl back.  My two youngest – then in kindergarten and 3rd grade – immediately took issue. They viewed the boy’s reaction as self-defense. What could I say? Good point. My older son, on the other hand, understood that relationships between boys and girls are different among teenagers. My little ones still ran around the playground with female classmates who were often bigger than them. Things change when boys and girls begin to evolve into young adults.

This month, I will take advantage of the few private moments I have with my oldest son (usually in the car on the way to school) to build upon that conversation that took place around our dinner table. Thinking back on the young boy and girl, standing in their classroom with stinging cheeks, I’ll listen to what my growing son thinks is acceptable between men and women now. I’ll ask if he has trusted adults (not just me and his father) as resources for guidance about love and dating, and the complexities that they involve. I’ll make sure he knows that respect for others and self is reflected in his behavior in relationships.

I have a role to play in helping my son become 50% of a healthy couple, whenever that day may come. I hope others also use this month to reach out to their teens, and recognize the role that everyone can play in preventing teen dating violence.

Start Strong is a national program to promote healthy relationships among 11- to 14-year-olds and identify promising strategies to prevent teen... END_OF_DOCUMENT_TOKEN_TO_BE_REPLACED