Congressional Redistricting and Health: Yes, There is a Link 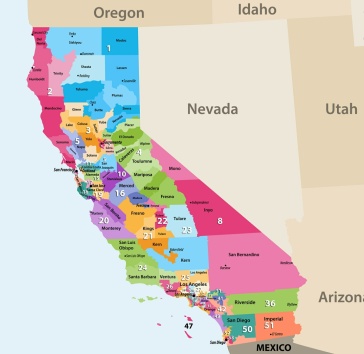 This blog originally appeared on the Blue Shield News Center.

A healthy, inclusive, representative democracy is key to good physical and mental health.

An estimated 80% of our health outcomes are shaped by conditions outside of health care such as housing, justice, wages, the environment, education and gender and racial equity. That social agenda can be more responsive through civic engagement and accountability. That’s why redistricting and the census that preceded it were supported by Blue Shield of California Foundation.

Along with many foundations and the state of California, Blue Shield of California Foundation invested in census outreach to make sure that every Californian got counted.

“Once the census data are released, then the redistricting process begins. Whose voice gets heard in that process?”  said Richard Thomason, Blue Shield of California Foundation policy director. “We are supporting statewide and regional organizations who can educate their communities about the importance of redistricting so that people can show up and demand fair representation.”

So far in 2020 and 2021, the Blue Shield of California Foundation has made $1.3 million in grants to agencies working to ensure that all communities have a seat at the table. The four grant recipients -- the Fair Representation Fund at Southern California Grantmakers, the Latino Community Foundation, the Center for Social Innovation at the University of California, Riverside, and California Common Cause -- are engaging marginalized communities who are often left out of the redistricting process. The grants aim to increase the voice and power of communities of color in drawing congressional, state, and local government district boundaries, which will help elect leaders who will take the needs of those communities into account when making health policy decisions.

California has a non-partisan commission with representatives from both major political parties to draw Congressional and state legislative district lines, where most public attention will be focused. The Foundation’s grantees will use funds to educate and organize community members, as well as to hire independent mapmakers to take population data and slice and dice it using principles of equity to keep communities of color together.

However, California Common Cause is focusing on local city council and county supervisorial districts, which are equally essential but more likely to slip under the public radar. “Congressional districts are important, but those massive federal decisions are implemented by local decisionmakers,” said Jonathan Mehta Stein, executive director of California Common Cause.

This year, Congress will debate legislation that can make enormous investments in infrastructure and recovery programs to get the economy back on track after the pandemic.  If passed, it will be city councils, county supervisors, and school boards who will decide local priorities for how these investments are spent on roads, broadband, schools, and family services.  Thus, who sits on these boards makes a big difference in the lives of Californians.

“I don’t think people realize how many decisions are made with no input from community,” said Mehta Stein. “It’s an equity issue. People are less likely to be able to show up if they are working multiple jobs, balancing family obligations, or come from communities that perceive that they are not allowed to participate.”

That’s where the Foundation’s grant to California Common Cause comes into play. The organization is using funds to expand civic participation in redistricting. They work with local groups to educate, train, and build confidence within underrepresented and under-participating communities, so they can speak out at public government meetings and write letters to elected leaders – all in support of fair district maps.

Redistricting and participation in our democracy can have vast impacts on how public policy is crafted and how public  dollars are spent to improve the health of communities. Therefore, civic engagement is a central component of holistic health.

Blue Shield of California Foundation believes that building the power of under-resourced communities is essential to increasing health equity and outcomes for all Californians.

“When historically marginalized communities have greater access, more participation, and more representation in our government,” Thomason said, “The Foundation is investing in this redistricting support because we believe that when everyone has a voice in our government, then  we will ensure that all Californians’ needs are met in ways that create a healthier society.”