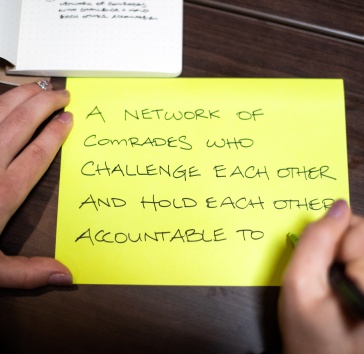 If you spent any time at the Foundation’s office — or read some of our emails — over the past eight months or so, you would have undoubtedly heard a lot about Reimagine Lab. I first heard about the as-of-yet-unnamed project in January — and I immediately jumped at the chance to get involved.

In my role on the Foundation’s public affairs team, I provide communications support for much of our work to break the cycle of domestic violence. And even with my relatively limited experience working with the field, I knew that this project would be special in its approach: bringing together leaders from diverse backgrounds to learn, reflect, and co-create to develop promising ideas and solutions to break the multi-generational cycle of domestic violence.

After the lab’s first meeting, the buzz around our office really picked up. It was obvious that this group of fellows had the chance to leverage their own experiences to challenge the group to be greater than the sum of its parts.

A few weeks ago, I stopped by the final meeting of Reimagine Lab, led by our partner Gobee Group, to speak with some of the fellows about their expectations, the diversity of the fellows’ backgrounds, and how they think this experience will inform their future work. More interviews with Reimagine Lab fellows are available on our blog, and we hope you’ll stay tuned – we’ll be publishing much more on Reimagine Lab in the weeks and months ahead. 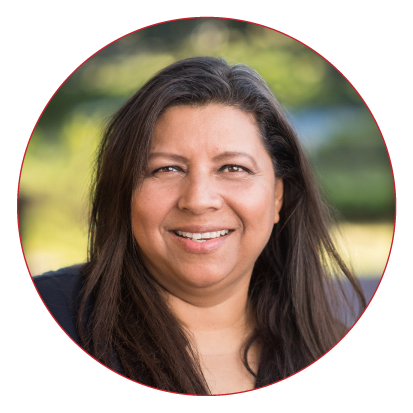 How has your experience at Reimagine Lab compared with your expectations?

One of the things that has been surprising has been the ability to be innovative and creative when you have space and time… so often we’re so busy in the day-to-day, meeting deadlines, that you don’t have the time to really think outside of the box and innovate. And I feel like this opportunity, and the spaciousness through the way the various gatherings have been set up, has really been conducive to thinking about things that we normally wouldn’t — and thinking in ways that we normally wouldn’t have time to.

How would you describe your experience in Reimagine Lab working with fellows from different fields and backgrounds?

It’s been really interesting to be with people from so many diverse backgrounds and experiences. And I think it has really allowed for us to think differently… And to bounce off of each other and come up with things that I think any one of us on our own or any one group with a singular focus would not have been able to do. So, I really have appreciated the diversity in the group and the lived and worked experiences of the various cohort members. I think it has allowed us to kind of negotiate and put a lot of our ideas together and come up with something very different than we would be doing on our own.

I think that the experience has probably changed all of us. I know for me, personally, I’m going to go back and really think about things from a place of "anything is possible" and that we shouldn’t limit ourselves to the traditional ways of thinking and doing things. And, so, just by hearing and seeing what some of my cohort members have come up with, I think that it really has inspired me to create different kinds of partnerships, and together, think about what is possible.

I think the name of the group — Reimagine Lab — was the perfect name, because the entire experience we’ve had over the past number of months has allowed us to reimagine not only the importance of prevention — we want to prevent domestic and gender-based violence before it starts — but really to think about how we do that in a way that’s connected to other kinds of issues. Because I think traditionally, we always take a single-issue approach — we work to end domestic violence, or we work to end sexual violence, or we work on racial inequity issues — but they are all connected, so working on them together and seeing them in that way has been further validated for me through this experience.

How did your experience with this group of fellows compare with your expectations?

I was surprised at how quickly we connected. It kind of felt like, “Sure, in the first lab, we needed to spend a lot of time getting to know each other, but by the second lab, do we still need to get to know each other? Let’s do some work.” But I realize now how important that was: those bonding experiences, spending time with each other, getting to know each other as human beings and not just other people that do the work. I think that was really important, because we really needed that — not just camaraderie, but that intimacy — between each other, and we really needed to understand what made every other fellow care — the way they care — and, so, once I understood everyone’s backstory and their commitment, it just became so much more exciting to work together. And I don’t think I’ve been in any other experience where that much intentionality was placed on getting to know your peers.

How important do you think diversity of experience was in Reimagine Lab?

You know, humans are known for selective exposure. We surround ourselves with people who are like us. But I think it’s really important to surround yourself with people who have different experiences, especially if you’re trying to solve a problem that’s… global. We don’t want to leave out huge chunks of the population if we’re trying find a solution. And that’s what I like so much about our (user group) teams. You know, we have undocumented immigrants, we’ve got black men and boys, we’ve got children of single parents, we’ve got at-risk youth. We’ve been able to cover all of these user groups because of our personal interests and connections to them. So, I think the more people you can get involved that are willing to share their experiences, the better off we’re going to be when it comes to solving such a big problem.

Moving forward, how will this experience impact your work?

It already has. Based on a conversation that Navya started on Slack about domestic violence and technology, I’ve organized a domestic violence and technology symposium on campus, and several of the fellows have helped me with that. So, several people who used to work with Sandra at CalCASA (California Coalition Against Sexual Assault) are going to sit on the panel, Addison is going to participate on the panel from the queer perspective, and that’s coming up in a few weeks. And it wouldn’t have crossed my mind if I hadn’t been having that conversation in the lab. And, so, I’m able to bring that to campus, to a whole group of people, and we’re going to do a design sprint. I want the students who are participating to solve the problem the way we do with human-centered design here. So, who knows what I’m going to do in the future, but in three weeks... 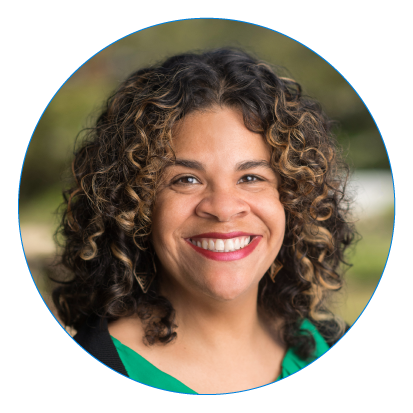 What surprised you about your Reimagine Lab experience?

I didn’t have any expectations. On the contrary, I had no idea what was going to be happening. So there really wasn’t any space for surprises. I think it’s maybe the sad part is that I can’t believe the six months is over. And I wish we had more time to work together and to further develop some of these ideas.

How important do you think a diverse group of fellows was to the success of Reimagine Lab?

It’s extremely important. We have one fellow who was both a survivor and a perpetrator of domestic violence. And his voice has been really interesting to have, because although there’s a lot of folks in the field who are domestic violence experts, and they know that it’s so important to engage with perpetrators, it’s even more compelling that that perpetrator has the face of a survivor.

Definitely the relationships. Especially with the L.A. folks, because we had to travel together back and forth. I’ve already connected with some folks on social media, and there’s a conference in L.A. that I know a couple of them are going to be a part of. So even just to be able to support each other, so when we get these opportunities to shine, other people can see that. And if you’re a star, I want to continue working with you. If you’re that passionate, then let’s be passionate together, and let’s move some things along. 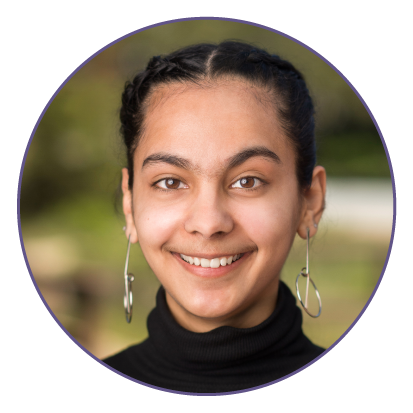 How has your experience at Reimagine Lab compared with your expectations?

My first concern when entering Reimagine Lab was that I’d never done any work like this, so I thought I didn’t have the expertise to talk about this subject, and also, I know domestic violence is a very personal issue for a lot of people. I felt a huge passion to contribute to this field in some way, but I also wanted to make sure that I felt safe and comfortable, and everyone else around me did as well. And I was pleasantly surprised. I felt that all the fellows were extremely supportive.

I was also surprised by the level of intricacy and detail and development that went into creating this lab to ensure that the fellows had a safe and good experience, connected to the problem and each other—and also the work that went into creating the prototype and the emphasis on creating something that can be used past this lab. It’s not just alive for these six months, but it goes way beyond that. And hopefully it can impact a lot more and change a lot more beyond that.

If you could go back in time to the first lab, what advice would you give yourself?

I come from the Bay Area, so I think that lifestyle and culture and mindset there is super different from what you would expect from other places. This was kind of my first time being surrounded by so many different diverse perspectives and people. So, I think for me, going in, it was expected that everyone thinks the same way as I do. And it was good that that was contradicted. It widened my scope and allowed me to look at this problem in so many different ways. But it also allowed me to converse with people and reach a different level of communication that I hadn’t before. I would advise myself to be much more open to these different perspectives and actually seek them out rather than just going in with my assumptions and seeking validation for those assumptions.

I think honestly this was my first high-impact role. It’s kind of cliché, but this idea of "I just want to help people" kind of carries along now to every single role and responsibility I take. I was initially very lost about how I wanted to use my skills (in computer science), and Reimagine Lab has sort of defined that for me. Even if I’m not working specifically in the domestic violence sector, but on other issues that I’m really passionate about, just having the idea of how Reimagine Lab operated, and what kind of skills were important for the lab, I feel like I can indirectly take away those skills and apply them to any other sort of high-impact personal, social, or political issue I work on.