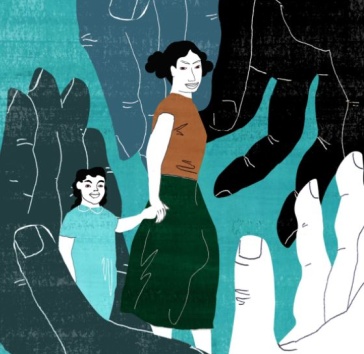 This article previously appeared in The Chronicle of Philanthropy:

A physician notices bruises on a patient during a physical exam. When asked, the patient reveals that she is regularly abused by her partner. A child-care worker is alarmed by a child’s unexplained injuries and troubling behavior. She calls protective services. A neighbor hears a violent argument in the apartment next door. He calls 911.

These moments may be the first time domestic violence is recognized outside of an individual’s immediate family, but the circumstances behind each scenario almost certainly go back a generation or more. Tragically, opportunities to break the cycle of domestic violence and alter the course of a person’s life were likely missed or never available.

Domestic violence lurks beneath the surface and is intentionally well hidden, but its impact reaches far beyond the home and affects the work of many nonprofits and foundations — whether or not they realize it. Domestic violence is both a cause and a result of numerous societal problems nonprofits seek to address, such as homelessness, economic instability, health inequities, and gender inequality. Yet these inherent connections are frequently unrecognized because domestic violence is still treated like an issue of private domain — too complicated and separate from other challenges.

To help raise awareness, advocates came together nearly 40 years ago to designate October as National Domestic Violence Awareness month. But it shouldn’t take designations of this kind to galvanize action on such a widespread and insidious problem.

1 in 4 Women Have Suffered Abuse

Across the U.S., one in four women and one in 10 men have experienced domestic violence, making it one of the nation’s most pervasive threats to safety and well-being. In California alone, 58 percent of the adult population, or nearly 18 million people, say they have been personally affected by domestic violence.

Shelters, women’s centers, and other community-based groups are leading important life-saving work to help individuals and families experiencing domestic violence. They provide temporary housing, food, counseling, and legal aid, as well as a chance for survivors to heal and escape future violence. Their work is especially critical now as the stressors and isolation resulting from the pandemic have increased the incidence of domestic violence worldwide.

In the United States, contacts made to the National Domestic Violence Hotline in the first two months of the Covid-19 lockdown went up 9 percent compared to the same period in 2019. During the first weeks of stay-at-home orders, police data shows up to a 27 percent rise in domestic-violence reports. Similar reports around the world include a 300 percent increase in quarantined areas of China, a 25 percent rise in Argentina, and 30 percent increase in France. Unfortunately, since most domestic violence is never formally reported, these figures provide only a small window into the problem.

While the vital work of frontline organizations must continue every day, it will take stronger, sustained collaboration involving an array of nonprofits to address the multi-generational causes and deep-rooted social structures that perpetuate domestic violence. Entrenched societal ills cannot be solved without addressing domestic violence. And prevention won’t happen if we focus on the problem in isolation.

Breaking the cycle requires a more expansive view of domestic violence that encompasses issues such as financial and housing insecurity as well as physical and emotional health. My organization — Blue Shield of California Foundation — has taken this approach as part of our grant-making efforts to stem domestic violence in our state. While the following examples focus on efforts in California, similar efforts can be embraced by grant makers working in a range of locations and issue areas.

Foundations should consider supporting a range of innovative organizations working at the intersection of domestic violence and economic insecurity. They include groups such as FreeFrom in Los Angeles, which is bridging the divide between corporate America and the domestic violence movement by training bank employees in how to recognize financial abuse—a common technique in most domestic violence cases whereby abusers entrap victims in violent relationships by preventing them from becoming financially independent.

Successful models include California’s Domestic Violence Housing First, which dedicates funds from the federal Victims of Crime Act to provide flexible support directly to survivors to help them avoid homelessness. An evaluation of the program found that Housing First funds prevented homelessness for 58 percent of survivors in the program by helping them solve small but urgent issues such as repairing a car so they could keep a job. Additionally, 40 percent used the financial assistance to obtain new housing, enabling them to escape unsafe environments.

We also know that the health of domestic violence survivors is affected in numerous ways beyond physical injury. Survivors experience anxiety, depression, and issues related to sexual health yet are often prevented from seeking care by perpetrators who aim to control them.

Foundations that focus on other issues, such as substance use, criminal justice, or inequities in education, employment, and child care, can also find multiple ways to address domestic violence as part of their work. The most successful programs engage survivors directly and develop solutions that are informed by their experiences.

To end domestic violence, communication and collaboration is critical across fields ranging from public health and housing to child care and gender equity. If we work together, the signs of domestic violence are less likely to be missed and we will have the tools we need halt its tragic cycle.