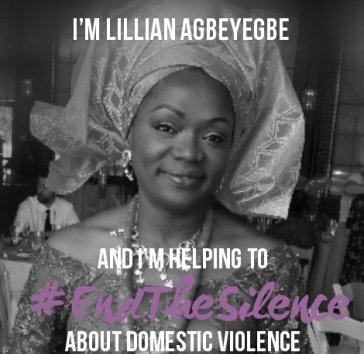 Last month, I found Blue Shield of California Foundation's Domestic Violence Awareness Month campaign iwillendthesilence.com that allows interested persons to put their name and picture on an awareness poster that reads, “I'm NAME, and I’m helping to #EndTheSilence about domestic violence.” I made one such poster. As a health educator, I chose my picture deliberately. I chose a picture in which I was wearing a traditional Nigerian outfit. The campaign is here in the United States but I felt it was important to signify, somehow, that this is a conversation that is needed in diverse communities everywhere. Although I have pictures with me dressed in simple traditional attires, I chose one with a ceremonial outfit. This was my way of saying that the domestic violence conversation in the Nigerian-American community needs to be had at various levels.

Recently, the picture began to trend on my Facebook page. During that time, I got this message in my inbox:

Attorney friend: “Did you post the wrong picture or what? That didn't resemble an abused face - it's an embraced woman's face.”

Me: “It's not the wrong picture. It's the 'we all need to get involved' picture.”

Me: “The picture doesn't say I'm a victim. It says I'm helping to end the silence about domestic violence. You bothered to read what it said, no?”

Attorney friend: “I read it. And my observation is that when they say 'a picture is worth more than a thousand words' there is a reason the photos they use in family violence campaigns are that of an abused person, not that of somebody at an Owambe party.”

(An “Owambe party” is a ceremonial celebration.)

As I re-read our exchange, I was confronted again and again with the challenges we face in ending domestic violence. Physical violence is only one form of Intimate Partner Violence (IPV.) The absence of bruises and scars is not indicative of an abuse-free relationship. According to the Centers for Disease Control and Prevention, there are four main types of IPV – physical violence, sexual violence, stalking and psychological aggression. The notion that abused persons must show physical scars is wrong. Surviving physical abuse cannot be guaranteed, and should not be a requirement for domestic violence.

It is also incorrect to expect victims of abuse to be the only persons to end IPV. Abusers have a role to play too. Their motivation to modify behavior cannot come exclusively from their victims. If this was all that was required, we may not even get to hear of IPV cases. Once the victim tells the abuser their behavior is about to compromise their relationship, the abuser modifies behavior to keep them from leaving. Unfortunately, this is rarely -if ever - the case. For most victims, nothing changes, and despite help from family, friends, religious and community leaders, they must leave the relationship in order for the abuse to end. For those far less fortunate, their lives end with the relationship, as do the lives of loved ones too-often caught in the fray.

For the abuser, motivation to modify their behavior should come from the society they live in - a society that does not excuse abusive behavior under the banner of drug or alcohol abuse, religious or cultural values, or any other reason. We know that abusive behavior is a choice the abuser makes because these same factors that “explain” why they are abusive towards their victims are also present in their history and in their interactions with other people. Yet, they manage to function well – sometimes with an extraordinary level of courtesy that makes the victim's story of abuse sound incredible. Our society – every one of us in our diversities - should be helping to create communities in which it is neither conducive to practice nor tolerate abuse.

Although I made my #EndTheSilence poster as an advocate, I am also an IPV survivor. And no, I don’t have pictures of me battered and bruised; no police report. I survived psychological aggression, which unfortunately isn’t "abuse" as far as many people are concerned. So, yes, I have had my experience with abuse questioned. I have had a friend laugh in my face and say that “nobody would believe anyone could intimidate YOU, let alone do so over a long period of time.” And I've been told that if someone reduced me to a shadow of myself, it was because “I allowed it."  Well, we have blamed the victims of domestic violence for a long time. We have excused abusive behavior. We have looked the other way and left the campaign to end domestic violence to “those people" and guess what? Domestic violence has not ended. It continues to wreak havoc in our communities with significant social, economic, and health consequences.

Many of us suffer close up – it is someone we know, someone we love. But even those who don’t know victims directly still get troubled and ask “why” when there is a domestic violence homicide, murder-suicide, or domestic violence related death that takes the lives of the innocent. Why? Because you kept quiet. That’s why.

Today, I ask you to be on C.A.L.L. to end domestic violence:

Lend support to a survivor

I am Lillian Agbeyegbe, and I am helping to #EndTheSilence about domestic violence.