If I Can't Dance 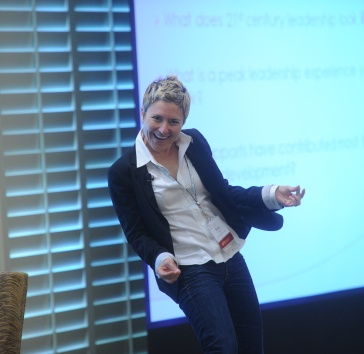 The physical and emotional scars of violence, the politics of government support, and the daily heartaches faced by advocates and leaders in the domestic violence field — these are not ideas that naturally inspire us to get up and dance. In fact, I’ve found that these are some of the best cocktail party conversation-stoppers you can imagine. If you want to bring a party conversation to a grinding halt, just mention that you work to end domestic violence. Of course, maybe I’m just going to the wrong parties.

For me, dance is exactly what I need to stick with the difficult and emotional work of ending domestic violence.

Domestic violence (DV) leaders are mostly women (and a few good men) whose passion, resourcefulness, and grit have sustained them to do some of the most important and difficult work I can imagine: preventing domestic violence and helping women and men who have been abused by their partners. As one leader describes it, their daily work is “murder prevention.”

"If I can't dance, I don’t want to be part of your revolution" – Emma Goldman

In May, Blue Shield of California Foundation (BSCF) brought together over 100 leaders from California’s domestic violence field, as an experiment in peer learning and networking at the Strong Field Project Institute. I generally try to avoid conferences. I’ve been to one too many in my career, and would be hard pressed to tell you what I learned from them. So, naturally, I was a bit skeptical about BSCF inviting leaders in the domestic violence field to invest their precious time in this gathering.

At the Strong Field Project Institute, we tried to produce an “unconference” that would inspire creative and collaborative thinking and help DV leaders, who deal in life and death every day, to tap into another part of their brain. And we took a risk. We tried something different: we danced. Well, not all of us, but I went out on a limb and (inspired by the Ellen DeGeneres Show) risked being the lone nut (If you haven’t seen this 3-minute TED talk about another lone nut, and the lessons on leadership, you must!).

It was amazing what happened when, in a windowless conference room in a hotel in a suburb of Los Angeles, we cranked some music and danced. The energy was contagious and palpable. The day was productive. And I’m more convinced than ever that if I — and others — are to succeed in sustaining ourselves on this journey towards justice, then dance, love, poetry, and laughter must all be part of the revolution.

It’s not a bad cocktail party story, either.