For all the uncertainty the novel coronavirus has introduced in our lives, it’s exposed social disparities we’ve known to exist all along, and in some cases made them even more pronounced.

A recent survey we commissioned corroborates what many of us know from experience: That the coronavirus pandemic has unevenly impacted ordinary Californians. Its worst effects fall mostly along already-existing lines, such as race, ethnicity, and sexual identity. While some people reported lost wages, social isolation, and feeling increasingly unsafe, others avoided the pandemic’s most disruptive effects, reporting gainful employment and low tension in their relationships.

While divides were certainly a major theme, the survey also illuminated bright spots in how Californians think about the deep-seated problem of domestic violence in our society. They are more likely today to view it as an urgent public-health crisis that requires an innovative set of approaches to address.

What determines how a family experiences the wide-ranging social and economic effects of COVID-19? What factors predict if they come out relatively unscathed or carry the brunt of its most devastating impacts?

The data from nearly 2,000 survey respondents, collected in January by the research firm PerryUndem, revealed we are living in different Californias: Although the coronavirus left a mark on every Californian in some way, Latinx and Black Californians were far more likely than their white counterparts to experience the pandemic’s most devastating economic effects. LGBTQ people were more likely than other respondents to experience the emotional and mental health challenges brought on by the pandemic.

“The pandemic is affecting all Californians, but the deep inequities that are being exposed and exacerbated highlight a huge divide, to the point that it is as if we are living in different Californias,” said Debbie I. Chang, MPH, President and CEO of Blue Shield of California Foundation.

People of color felt the worst economic effects of the pandemic.

Nearly two-thirds of survey respondents reported experiencing at least one negative effect from the pandemic, including lost jobs or wages, feeling unsafe at work, or having someone in the family contract the virus. But 8 in 10 Latinx individuals, more than any other group, experienced the greatest number of these negative effects. 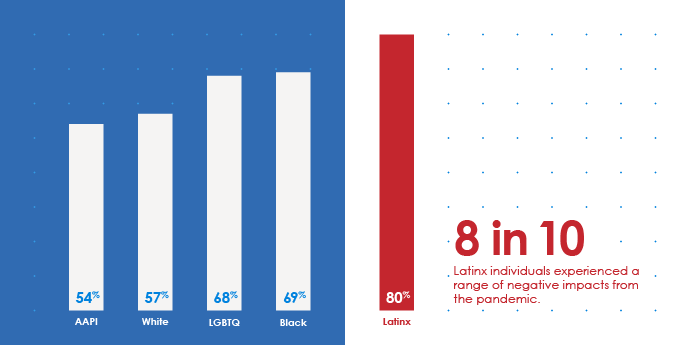 Latinx people are overrepresented in most of the state’s essential worker roles, which places them at increased risk for contracting the virus. Yet many live in regions and even communities with less access to testing, care, and prevention resources. One study from UCLA found that Latinx individuals aged 35 to 49 in the state died from the coronavirus at seven to eight times the rate of non-Hispanic whites during the second half of 2020. Another found that Latinx business owners received less money from the federal government’s Paycheck Protection Program than their white counterparts in wealthier neighborhoods.

“I feel information and communication drags so slowly to get to us,” says Elvia Rodriguez, CEO at Goldamity Insurance Services in Grand Terrace, in San Bernardino County. “By the time I even heard about [PPP]—and I'm very active on trying to stay up to date—I was already at the end of the list for applying for anything and got denied for everything initially. I do feel that was a huge challenge for me as a Latina business owner.” 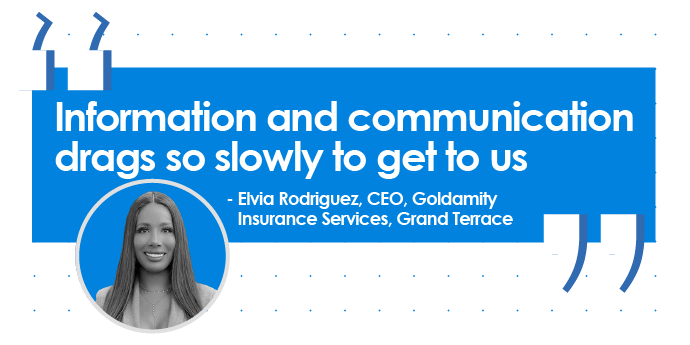 Rodriguez eventually received her PPP loan from a smaller credit union in California, but believes that the government’s first-come, first-served policy for the loans ensured that those with strong relationships to a big bank and deeply informed networks got the lion’s share of the money, an observation that the UCLA study supports.

The major effects of the pandemic, including illness, death, or job loss, were reported by about one-third of surveyed Californians. But even among the hardest-hit, clear racial patterns can be uncovered in the data: At 43 percent, Black respondents were more likely than any other group to say the pandemic has had such major effects on their families, compared to 30 percent for white respondents. 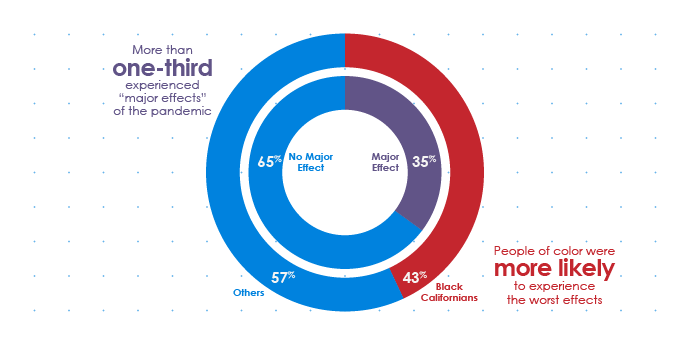 “The majority of our sales come from office coffee accounts, especially tech offices here in the Bay Area. All the tech offices got the same memo at the same time, and they all shut down within days of each other” said Keba Konte, founder of Red Bay Coffee, a Black-owned business based in Oakland. “That’s what brought our business to a screeching halt. We basically had to furlough everyone until further notice to see what would happen.” 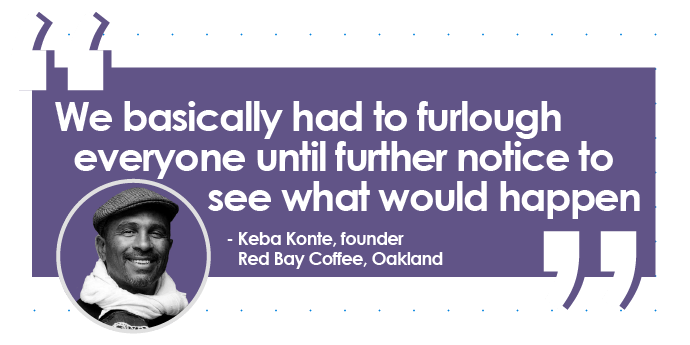 Like Latinos in the state, Black Californians are more likely to serve as essential workers. They also have higher rates of underlying health conditions, including diabetes and hypertension, that make them more vulnerable to the virus’ most severe symptoms, said Dr. Nadine Burke Harris, California’s surgeon general, in a recent California Black Caucus webinar.

The emotional toll also has been uneven.

In addition to exacerbating economic instability in the state, the pandemic has taken its toll on our emotional well-being and mental health. In nearly half of the survey respondents, the pandemic has instilled a feeling of danger or lack of safety, with LGBTQ individuals significantly more likely to feel unsafe, depressed, or isolated during the pandemic. 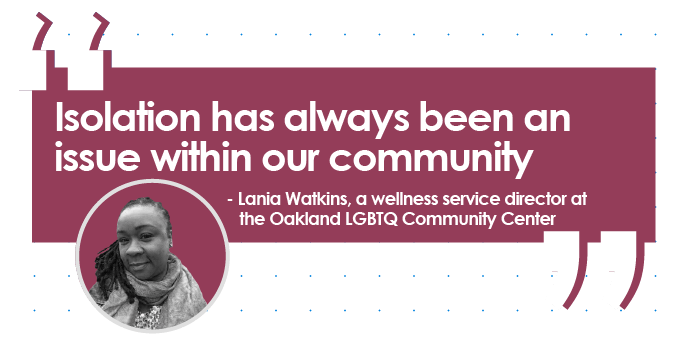 “Isolation has always been an issue within our community, not having close family to be with, friends. I just think the pandemic definitely exacerbated that,” Lania Watkins, a wellness service director at the Oakland LGBTQ Community Center. That isolation also has direct effects on the health of LGBTQ individuals. “Some folks are missing their whole hormone replacement appointment because of how the office has been. Folks couldn’t get their labs done, couldn't reach their providers, and access case managers.” 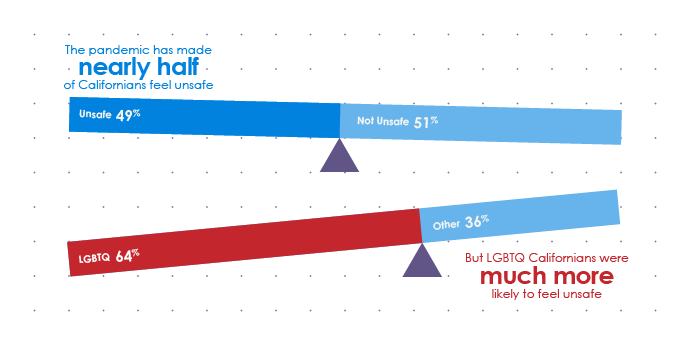 Despite bearing the greatest brunt of the pandemic’s economic effects, Latinx and Black respondents reported the least amount of social isolation. One possible reason, aside from housing conditions and family relationships, is that many respondents of color, disproportionately represented in essential service roles, did not have the same option to be isolated—the work continued.

“We just didn't know how bad it would get or how fast it would turn around, but we knew that we were all in it together,” Konte said of needing to slash hours at his coffee shop. “When you're just kind of in survival mode, doing what you need to do. A lot of the emotional labor and impact did not kick in until later.”

But others have seen the mental toll on their communities. “It definitely was an impact on my mental health, trying to handle the pandemic. I'm from Black and brown communities. And my communities were affected, including my own family,” said Marisol Catchings, who runs the Afro-Latina design shop Azteca Negra out of San Francisco. “Everyone is really struggling with the pandemic.” 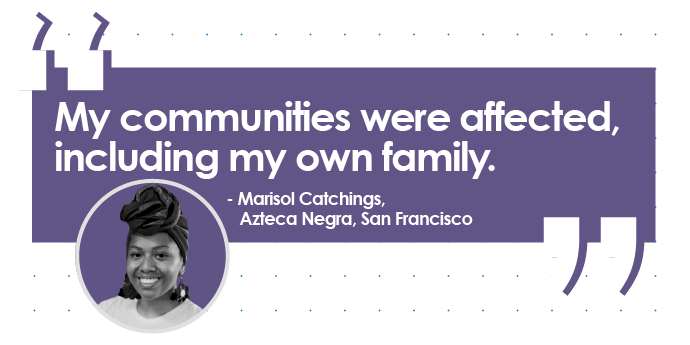 Those at high risk are less likely to call for help.

Those who are more likely to feel the worst effects of the pandemic were also more likely to distrust the institutions ostensibly designed to protect them. Almost half of Black Californians surveyed do not feel accepted as equal and valuable members of society, and 55 percent said police sometimes made them feel unsafe in their own communities.

That finding becomes even more problematic when viewed alongside the fact that most respondents believe the pandemic has made domestic violence more likely. They also believe the pandemic has made it harder for people experiencing domestic violence to reach out for help. While two-thirds of Californians say the police would be a helpful resource if they were assaulted by a spouse or intimate partner, nearly half of Black adults say police would make the situation worse or wouldn’t call them to begin with. 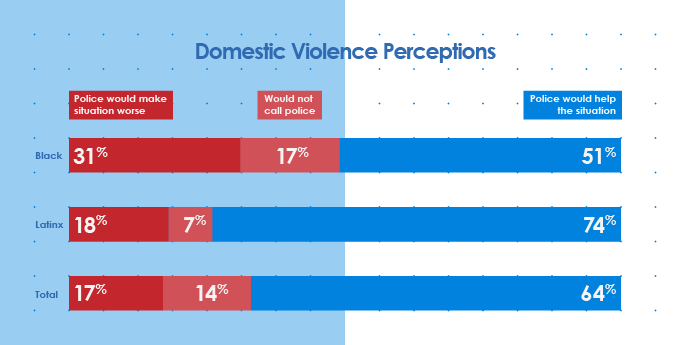 The perception that racism is on the rise is not limited to Black respondents: A majority of Californians say racism has increased in the last few years and that systems in our society are set up to give white people more opportunity.

The good news: Californians care about each other.

While most of the survey results point to a troubling divide in the social fabric of the state, we can more optimistically report that Californians are building consensus around some social issues that have previously taken generations to reach public awareness.

The other promising trend is that Californians not only understand the severity of domestic violence with more clarity, but are open to alternatives to jail for those who perpetrate it, a position that transcends political party ideology. 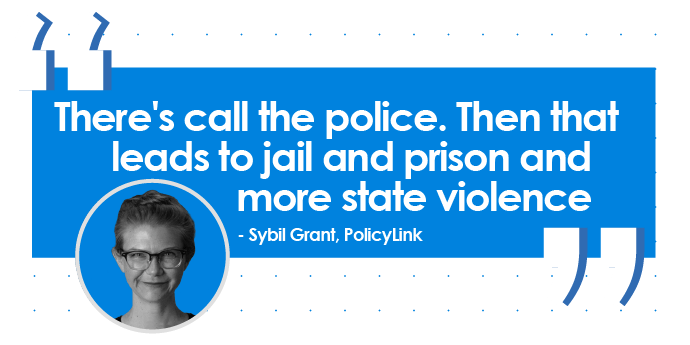 “The way the current system is set up, there's really only one response, right? There's call the police. Then that leads to jail and prison and more state violence,” said Sybil Grant of PolicyLink, an Oakland-based organization focused on advancing racial and economic equity. “That doesn't actually put people on the trajectory to address the underlying healing needs.”

While 8 in 10 agree that counseling, supervision, and restitution could be better solutions than jail time for perpetrators, Californians also favor new strategies to help the victims of domestic violence. About 90 percent support childcare, food, and housing assistance, as well as paid leave from work, which aligns closely with what survivors of domestic violence themselves report needing to feel supported: having a safe place to live, a steady job, and financial stability. This means that Californians are strongly in favor of policies that survivors themselves believe would be helpful. 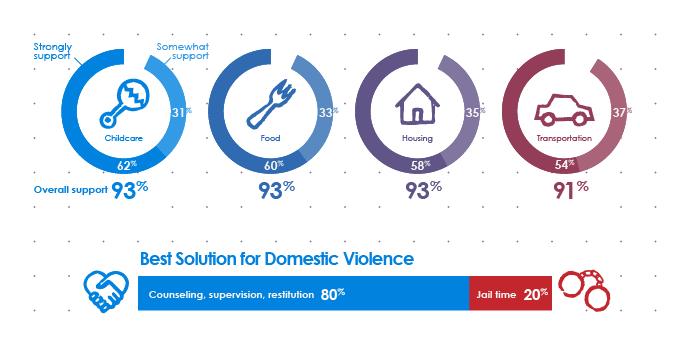 “We are encouraged that state residents see domestic violence as a public health issue,” Chang said. “New approaches to preventing it hinge on understanding that domestic violence is an intergenerational problem that impacts health and requires both personal healing and systemic change.”

The coronavirus has introduced new challenges to our lives, but it also exposed much of what was already there: a pattern of deep inequality, where the most vulnerable communities experience the worst of a far-reaching phenomenon, such as a pandemic.

This pattern of inequity is at the heart of our work and funding priorities moving forward. It is only by tackling it head-on that we can fulfill our goal to make California the healthiest state and end domestic violence. We are committed to reducing economic inequality, preventing domestic violence and childhood exposure to it, and ensuring public and private systems are responsive to the needs of their communities.

*Note, interviews for this piece were conducted separately from the PerryUndem survey, with subjects who relayed experiences aligned with broader survey findings.