A Moment for a Movement: Domestic Violence Awareness Month 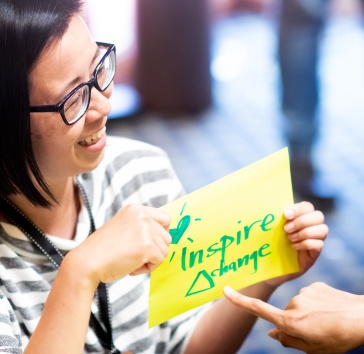 October is Domestic Violence Awareness Month. Each year at the Foundation, we take the opportunity to highlight a particular aspect of our work to end domestic violence — including the voices and work of our amazing grantee partners.

This year, however, feels different. We take care to mention each year that domestic violence doesn’t go away when we turn the calendar to November. But throughout this year, gender-based violence — domestic violence, sexual violence, and sexual harassment — has occupied a near-constant position at the fore of our societal consciousness. While that might seem on its face to be the outcome we’ve been hoping for — all of us paying attention to what sometimes seems to be an invisible issue — in reality, it’s proven more complicated.

As the #MeToo and Time’s Up movements have empowered survivors across the country to stand up and share their stories, they’ve also laid bare the alarmingly deep-seated gender inequities that have long simmered in our society. At the same time, real threats to vulnerable communities — such as the Trump Administration’s exclusion of domestic violence as grounds for asylum — have injected a new urgency into a long-standing problem and highlighted the intersections of the many challenges facing communities across California.

In January, we announced the Foundation’s new strategic direction. This new strategy acknowledges the many factors that influence a person’s, a family’s, and a community’s health and well-being. It seeks to uncover and understand the complex, ever-changing nature of the many challenges facing our communities across the state. If we really intend to live up to our values — and achieve our mission — it is essential that we prevent poor health and violence before they start.

When it comes to breaking the cycle of domestic violence, this has meant exploring and developing new approaches, new partnerships, and new ways of working. We are prioritizing learning. And we know we’ll only succeed through partnership. Some early themes hold promise:

We are in a movement moment. The nation is paying attention to an issue that’s front-of-mind for so many of us every day. We know that if we work together, we can seize that moment and break the cycle of domestic violence. We invite you to join us in this conversation —throughout this October and every day that follows — by following our blog and our Facebook, Twitter, and LinkedIn pages.