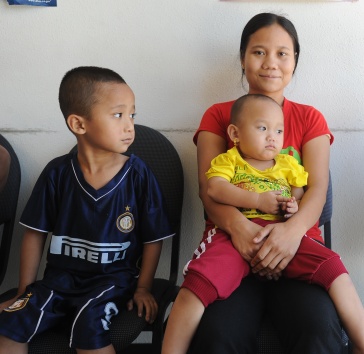 The following statement was sumitted via regulations.gov in response to the Inadmissibility on Public Charge Grounds Proposed Rule. Download a PDF version of the statement here. To submit your comments, visit regulations.gov

RE: Comments on Proposed Regulation – Inadmissibility on Public ChargeGrounds (DHS Docket No. USCIS-2010-0012)

I am writing on behalf of Blue Shield of California Foundation (the “Foundation”) to express our strong opposition to the Department of Homeland Security’s Notice of Proposed Rulemaking (“proposed rule”) on public charge, published in the Federal Register on October 10, 2018.

Our mission is to build lasting and equitable solutions to make California the healthiest state in the country and end domestic violence. To achieve this mission, we build strong, safe, and vibrant communities in California where all people are heard, respected, and have opportunities to contribute. In a state where 27 percent of the population is foreign born, half of all children live in immigrant families, and even more are second- and third-generation immigrants, we would all be negatively affected by these harsh rules.

The proposed rule is both unnecessary and would cause great harm to immigrant families and communities throughout California. The rule proposes to establish a higher bar for legal permanent residence in the United States by denying admissibility to immigrants based on age, education, income, health, and the receipt of certain public benefits. Many immigrants could be prevented from obtaining legal permanent residence simply because they have used these public benefits, or if immigration officials believe they are likely to do so in the future.

The proposed rule would deter millions of Californians from accessing health, nutrition, and housing programs for which they are eligible and that are in place to ensure a healthy California for all. For fear of impacting their immigration status, immigrant families would be less likely to sign up for Medi-Cal coverage or Supplemental Nutrition Assistance Program (SNAP) benefits that will improve their health and well-being. Researchers from the University of California-Berkeley Labor Center and the University of California-Los Angeles Center for Health Policy Research estimate that between 317,000 and 741,000 Californians would disenroll from Medi-Cal due to the chilling effect of the proposed rule, and between 129,000 and 301,000 Californians would disenroll from SNAP. They estimate that the loss of federal funds from these disenrollments would cost California’s economy as much as $2.8 billion in lost output and 17,700 jobs, primarily in the health care and food sectors. Moreover, nearly 70 percent of the California residents projected to disenroll from health care and nutrition assistance benefits would be children.1 These decisions would have long-term impacts on children and families and ultimately limit their opportunities to succeed, to build a strong future for their families and communities, and to contribute the full measure of their talents to the future of this country.

We know that immigrant families in California are already suffering because of harsh changes to federal immigration policy. A September Kaiser Family Foundation report, co-funded by Blue Shield of California Foundation, found that current immigration policies are negatively impacting the finances, health, and well-being of immigrant families.2 Our grantees report that their immigrant patients and clients are increasingly reluctant to enroll themselves or their children in Medi-Cal, obtain SNAP benefits, sign up for free reduced school lunches, and seek help to address domestic violence. The proposed rule would exacerbate these problems and make millions of Californians sicker, poorer, and less safe.

Blue Shield of California Foundation is one of the largest private funders of domestic violence services in the United States. Consequently, we are deeply concerned that the proposed rule would have a significant harmful impact on survivors of domestic violence and sexual assault. Medi-Cal, SNAP and housing benefits help survivors and their families escape abusive situations and restore their ability to be productive members of our communities. Without these services, women would be more likely to remain in abusive relationships, exposing themselves and their children to additional trauma and harm.

The proposed rule notes that because it would reduce enrollment in federal programs, it could have the following impacts:

Worse health outcomes, including increased prevalence of obesity and malnutrition, especially for pregnant or breastfeeding women, infants, or children, and reduced prescriptions adherence; increased use of emergency rooms and emergent care as a method of primary health care due to delayed treatment; increased prevalence of communicable diseases, including among members of the U.S. citizen population who are not vaccinated; increases in uncompensated care in which a treatment or service is not paid for by an insurer or patient; increased rates of poverty and housing instability; and reduced productivity and educational attainment.

We believe all of these negative consequences, and more, will certainly occur if the rule is adopted, at great cost to immigrant families, their communities, and all of us in California. For this reason, we oppose the proposed rule.