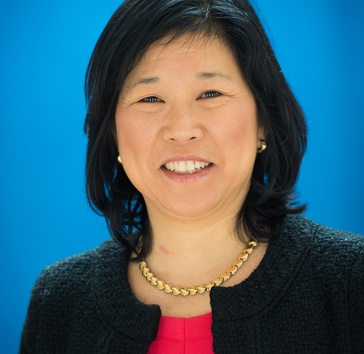 During a class at the Harvard School of Public Health, Debbie Chang’s instructor showed a picture of a tractor in the middle of a field in Africa. Rusted away, with weeds growing through its seat and tires, the tractor stood forgotten and ignored, the last remnants of some well-intentioned but badly thought out campaign for change.

“The point was that you can’t force social change upon people,” Chang says. “It may work in America, but it won’t work in Africa. It really made me think about how you can’t solve problems in a top-down model. You’ve got to focus on the local people and their culture, and solve problems with the community, not for the community.”

The lesson Chang learned from a simple image of a tractor in a field has stuck with her across a career in public health that spans more than three decades. In February 2020, Debbie I. Chang took over as President and CEO of the Blue Shield of California Foundation, picking up a gauntlet already heavy with successful campaigns and goals for the future.

Early Life in Michigan in the 1960s

Chang’s parents immigrated to the United States in the late 1950s. “I’m the first generation born in this country,” she says. “I grew up in Michigan in the 1960s, at a time when there weren’t many people of color. All through my childhood, it was very humbling because I was constantly being judged by the way I looked.”

She looks back on the experience as something that taught her to be empathetic. This empathy is at the root of her commitment to equity and inclusion today.

“I always put myself in other people’s shoes–or at least I try to,” she says. “Many people in California have similar backgrounds and experiences to mine–they are immigrants, or second- and third-generation children of immigrants. The Foundation’s work impacts these communities, and we make sure that we include the people we want to help in the design of our programs. This speaks to the core of my philosophy to listen first, with empathy.”

Chang didn’t start out in the world of public health: she pursued a chemical engineering degree at MIT. “I ended up at MIT because my parents pushed me hard on math and sciences,” she explains. “I was pursuing engineering, but it really wasn’t satisfying to me. I was interested in bringing about change and making the world a better place. That’s why I started exploring other fields where I could have a bigger impact on the world.”

One day, while looking through various books in the school’s career center, she found herself reading more and more about public health.

She signed up for a public health course offered on Harvard’s campus, where something as simple as a photo of a tractor transformed her perspective on changing the world.

“Through a career in public health, I could help bring about broader social change,” she says. “Public health is about deeper, lasting change, and, very importantly, it is about equity, inclusion, and community–working with the community to make change happen.”

This desire to “make change happen” is part of what brought Chang to the Blue Shield of California Foundation.

“I have been a huge admirer of the Foundation for a long time,” Chang says. “Blue Shield of California Foundation is not afraid to break new ground and tackle seemingly intractable problems. We have a great and talented staff, an engaged and diverse board, and I believe this is a place where I can hit the ground running and where I can apply all of my experience to help accelerate the progress the Foundation is making on achieving its bold mission and goals. I feel like I can make a difference working with this amazing team.”

According to Chang, what really attracted her to the role was the opportunity to make an impact for millions of people in the largest state in the country, on issues she cares deeply about. Looking back on her career, it’s easy to see her passion for addressing the root causes of poor health and the social determinants that contribute to health issues. Chang has worked with community organizations and global companies alike to combat domestic violence, challenge childhood obesity, and work collaboratively to reduce morbity and mortality in the United States.

In the first half of her 33-year career, Chang focused on healthcare financing and Federal and State policy change, particularly those related to Medicaid and CHP programs. On this higher level, Chang was able to see that healthcare is only a small contributor to morbidity and mortality. This realization led to a new mission: to take on the root causes of health issues and to prevent sickness from happening in the first place.

Chang found a home in the Nemours Children’s Health System, where she spent the last sixteen years focused on incubating innovation, and spreading and scaling population health strategies to help families grow up healthy. Her programs started in Delaware, then grew to focus on national initiatives in partnership with other like-minded organizations.

One of Chang’s proudest successes comes from a $22 million grant the Center for Disease Control bestowed to the Nemours team to prototype, spread, and scale a program supporting childhood centers. The goal was to change policies and practices related to healthy eating and physical activity. The team at Nemours worked over six years to expand the program, bringing it to 15 states and reaching more than 200,000 children.

Her Nemours team achieved a similar victory in the fight against childhood obesity. In 2009, Nemours built on more than 15 years of partnerships with organizations like the California Endowment, Kellogg Foundation, the Robert Wood Johnson Foundation, and Kaiser Permanente to parallel Michelle Obama’s Let’s Move campaign. The collaborative campaign, called The Partnership for a Healthier America, fought against childhood obesity by raising awareness, spreading educational resources, and–through another collaboration called Let’s Move Child Care— working directly with childcare providers to incorporate healthy eating and physical activity into their daily routines.

The success of these programs depended on finding scaleable solutions that would work for individual communities, not passing down some “one size fits all” program through a top-down approach.

This community-focused approach helps inform Chang’s plans for her role at the Foundation, citing her alignment with the Foundation’s mission “to build lasting and equitable solutions that make California the healthiest state and end domestic violence.”

“My first and most important goal is to listen and learn,” Chang says. “There’s already been a lot of great work accomplished, and we want to really build on and learn from that. The same thing with partners: We have a lot of great partners and want to build on these partnerships and create new ones. I want to take the momentum around the Foundation’s strategies and accelerate it. My hope is that the Foundation continues to be recognized as a leading force for improving health outcomes across California and nationally. And that we continue to make measurable progress on our mission to break the cycle of domestic violence and collaborate with others to be the healthiest state in the country.”

One of the most pressing concerns for the Foundation is the COVID-19 pandemic.

“The current coronavirus crisis is exposing some of the weaknesses in our public health infrastructure,” Chang explains. “Because public health is largely ‘invisible,’ it has been chronically underfunded and the state of our infrastructure during this time of widespread need reflects that. It is unfortunate that it has taken a pandemic to put public health in the spotlight. My hope is that when we get to the other side of this crisis, we can maintain awareness of the value of public health and the need to sustain it by providing adequate financial support to build the capacity of the organizations we rely on to keep people healthy.”

“Public health is not just the job of people who are in public health,” she adds. “It’s the job of the entire community and there is a role for everyone to play. Spreading and scaling draws more people into carrying out effective prevention strategies. We want to get to a place where we are talking about creating the conditions that allow for good health. And that’s not a job that we in public health can do alone.”

Chang sees a huge opportunity for feminist philanthropy to make an impact in the world of public health.

“The key components of feminist philanthropy — collaboration, lack of ego, and intersectionality — are essential to public health,” she says. “The ideas of collaboration and working with the people we want to help — rather than providing top-down solutions — are at the core of what I believe and at the core of the Foundation’s work.”

Considering feminist philanthropy brings her back to that first exposure to public health: the photos of the unused tractors sent to improve farming in Africa.

“It is critically important, and it is what drew me to this field in the first place: to work side by side with people in the communities we are supporting to find solutions that are realistic and workable in their world. They best understand the potential solutions and the obstacles. At the Foundation, this also means listening to our grantees and giving them a strong role in decision making. Our grantees are close to the issues and in the best position to know what works. Our role is to help strategically build their capacity and spread and scale their solutions.”

Right now more than ever, the future is uncertain. But by working together, and committing to lofty ideals and goals that contribute to the betterment of humanity, we can make those ideas seem, not so lofty after all, but rather possible, and actionable, and necessary.

“I am excited to have the opportunity to work with the Foundation team to build on the powerful prevention strategies that have been in place since 2018,” Chang says. “Existing grants and relationships with grantees are bringing insights that the Foundation is ready to build upon. But we are not going to be able to meet these ambitious goals by ourselves. We need to work with people in the field and build on existing partnerships and create new ones to spread and scale this work. I am excited and energized about working in California and with the Foundation. The first thing I will do is look to the basics that I learned in that first public health class, and that is to listen and learn from communities and people on the ground close to the problems, and also listen and learn from the staff, partners, and board members who have been intimately involved in this great work for many years.”

Chang knows this process won’t happen all at once.

“Part of it will be incubating innovations and building on successes,” she says. “Part of it will be taking what we know and spreading it through a combination of practice and policy. One of the things I’ve learned in my career is that you really need both. You need policy to get at that broader social change. You need practice strategies to give people the tools that make change possible.”

“I want to accelerate the work we are doing,” she adds. “I want to solidify and establish new partnerships that result in lasting and equitable evidence-based solutions. That is one of the things that really attracted me to the Foundation. It isn’t just trying to come up with any solution to problems. Rather, the fundamental focus is sustainable, lasting solutions. We want to be known as a foundation that is not afraid to break new ground and tackle seemingly intractable challenges.”