Thrown for a Curve 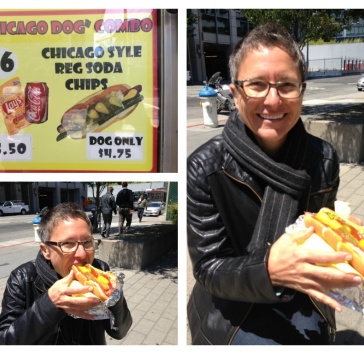 For me, the best part of going to a baseball game is, actually, not the game itself; it’s the opportunity to enjoy one of my favorite, deliciously unhealthy treats: a Chicago-style hot dog.

It’s not that I dislike baseball — I grew up in Pittsburgh, where sports fandom is a basic requirement — it’s just that after a few innings, I confess that I find the game a little...yawn...boring.  And there are only so many hot dogs this girl can eat!

But what brings me to the topic of baseball is not the long innings or the Chicago-style hot dogs. It’s this: while walking home from work the other day, on a typically balmy San Francisco evening, I noticed a teenager with a baseball bat walking towards me. I was on my usual route from the BART station, passing my neighborhood park, and he was about a block away. From his appearance, he was probably coming from a game, decked out in a baseball uniform with grass-stained knees and all. My immediate reaction surprised me— I felt compelled to cross the street in order to put a safe distance between me and his baseball bat. I realized that, after working in the field of domestic violence services and prevention for the last five years, I now saw the bat as a potential weapon instead of just another piece of sports equipment.

At that moment, I understood what it must feel like to walk through the world as a DV survivor, triggered to terror by an otherwise unremarkable sight or object. In a recent article in The New Yorker about domestic violence homicides, survivors of domestic violence are described as more "messed up” than their abusers because “violence affects victims a lot more than it affects batterers. Batterers don’t lose sleep like victims do. They don’t lose their jobs, they don’t lose their kids.” As a result of their many trials, travails, and troubles, victims then become the ones who come across as more “messed up.”

And now I understand — just a little bit more — why.

So the next time I go to a baseball game for a Chicago-style hot dog and I see the first player up-to-bat, I’ll take a moment to think about all of the survivors out there who are trying to get a good night’s sleep, keep their jobs, and keep their heads up, every single day.