Unity, Ingenuity, and Hope in Havana 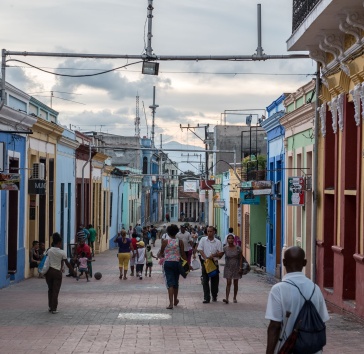 I recently had the opportunity to travel to Cuba for an educational trip with my fellow board members at Grantmakers in Health and the Medical Education Cooperation with Cuba (MEDICC). I was thrilled to observe Cuba’s culture and social systems first-hand as they begin their transition to normalized relations with the U.S. after 56 years under embargo. In fact, our visit ended a week before the first American cruise ship would arrive in the Havana Harbor, and the subsequent signing of new agreements between the Cuban Ministry of Health and U.S. Department of Health and Human Services to establish an historic health collaboration.

Being on the ground during this dynamic time in Cuban history was enlightening and eye-opening in a number of ways. While touring local organizations, one of my first impressions was the tremendous power of community-based health solutions thriving within a broader system that enables sustained, positive social impact. It has been well-documented that Cuba produces some of the best health outcomes in the world, despite relatively low per-capita incomes and overall healthcare costs. Infant mortality rates are also lower in Cuba than they are in the U.S. and life expectancy is comparable, while their national healthcare spending is dramatically less - Cuba spends under $1,000 per person, versus nearly $10,000 per person in the U.S.

During our eight days in Cuba, we witnessed many inspiring programs focused on health education, community engagement, polyclinics, senior services, youth outreach, biotechnology, and more. It seemed that nearly every program harnessed the power of local microenterprise to transform lives, families, and neighborhoods. We spoke with Gilberto “Papito” Valladares, a barber and entrepreneur who had just met with President Obama, and visited his training program that teaches deaf people to become barbers and stylists. We also ate lunch at a nearby restaurant staffed entirely by young people enrolled hospitality training. The revenue generated from these programs is used to upgrade the neighborhood’s infrastructure.  Though impressive, much of the efforts we witnessed were reminiscent of programs underway here in the U.S. and throughout California. If you squint your eyes, add a beard, many inches of height, and a few years, Papito could be Father Gregory Boyle, who runs the world-renowned organization Home Boy Industries in East Los Angeles.  Similarly, Cuba’s Pogolotti Project reminded me of Community Health Councils in South Los Angeles, where they work to empower and improve the wellbeing of low-income women and youth. We visited an adult day healthcare program located in a suburban Havana home that could have existed in Fresno or any other rural region in California. And the interdisciplinary polyclinic team in Cuba’s Mayabeque province looked much like the team at Indian Health Center of Santa Clara Valley, or any number of community health centers in California. Medical facilities in the U.S. may be more modern and have more advanced technology, but the atmosphere and approaches to healthcare in Cuba were remarkably similar to what I’ve seen here, across our healthcare safety net.

The familiarity that I experienced also surfaced two fundamental differences between Cuba and the U.S. First, the programs that we visited in Cuba operated within an overarching system that supports and reinforces the efforts of each independent program. In many cases, they were almost fully funded by the Cuban government and integrated into a broader social safety net. Second, the programs had clear population-level targets that went beyond individual health outcomes. In order to assess progress against their goals, providers had a more complete view of the health and wellbeing of their communities, and multiple elements of the health and social-service systems worked together rather than in isolation. For example, the director of an autism program in Havana could tell us the status of every child in the program as well as those that had transitioned to public schools. The doctor at a polyclinic outpost had a filing cabinet in her office with information on every one of the 1,319 people under her care, she knew exactly how many births and deaths had occurred, and could accurately describe the overall health status of the population.

In the U.S., private foundations like ours often fund inspirational programs and organizations to develop new ideas and undertake innovative pilot projects. We then support evaluations to determine whether these solutions work, and attempt to scale and spread those that are most promising. While there have been notable successes, we’re still missing a shared vision for the American healthcare system – one with collective goals, measures, definitions, and the ability to communicate effectively and seamlessly across providers, sectors, and specialties. What Cuba illuminated for me is the power of solidarity and collaboration to make meaningful, sustainable improvements in the health and safety of whole communities.