Violence Reverberates Across Communities and Generations 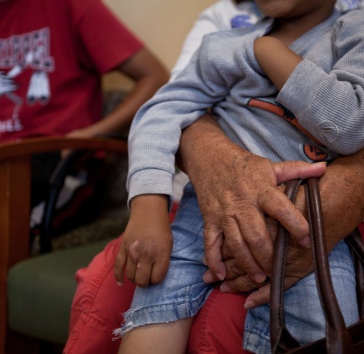 October marked National Domestic Violence Awareness Month, and as part of our efforts, the Foundation was proud to support the October issue of Health Affairs — Violence and Health — which examines the consequences of violence for survivors, perpetrators, and communities. The idea for this important issue arose from a seed planted during a panel discussion at Grantmakers in Health three years ago and marks a real contribution to our collective work on, and understanding of, this pressing health issue.

Now that it has come to fruition, we’re reminded that this topic is as urgent and essential as it was then. The impact of domestic violence on our nation and the state of California runs deep. A 2017 Foundation-commissioned survey showed that 58 percent of Californians have been touched by domestic violence — either as a victim, as an abuser, or through a close friend or family member. That means more than half of our state’s population is affected by domestic violence. And that’s 20 million people too many. These sobering statistics show us that violence has been — and remains — an epidemic that threatens the strength of our communities, the health of our families, and the promise of too many futures.

Violence threatens the strength of our communities, the health of our families, and the promise of too many futures.

This important issue of the journal also connects the two aims of our Foundation’s mission — to make California the healthiest state and end domestic violence.

I was fortunate enough to attend discussions surrounding research in this publication in both Washington, D.C. and Los Angeles, and I wanted to share some of the ideas that resonated with me at both of those events.

One of my biggest overall takeaways was the need for a coordinated, prioritized research agenda around domestic violence. Researchers from many fields are pursuing areas of interest that touch on domestic violence. We need collectively to identify what the biggest and most important gaps in knowledge are, then push this agenda with public and philanthropic funders. We have a long way to go to build a body of knowledge, a formidable cadre of researchers, and a field of practice in this area of violence. No other major cause of injury and death has so meager an investment from government and philanthropy. We hope this selection of studies is just a starting point for research examining the intersection of violence and health.

No other major cause of injury and death has so meager an investment from government and philanthropy.

In DC, we had a rich discussion and made numerous connections among this varied but related group of papers, which fell into broader categories of community violence, mental health and suicide, and firearms. Some ideas that stood out to me:

In LA, the presentations and conversation, which focused on violence and health as well as policy responses to violence, left me with these impressions:

A final conclusion from all of this research is a belief that remains at the core of our work: preventing domestic violence is possible.

Blue Shield of California Foundation has been among the nation’s strongest advocates for ending domestic violence, contributing more than $100 million to address and prevent domestic violence in California since 2002. We know that violence creates cumulative harm that spreads through generations and significantly impacts health and wellbeing — both directly and indirectly. Until we fully understand the connections and consequences of violence, we cannot stop its self-perpetuating cycle. However, we strongly believe that ending domestic violence is possible, and that together we can break the cycle of abuse so that we can create a new generation of Californians who are safer and stronger than ever before.

A final conclusion from all of this research is a belief that remains at the core of our work: preventing domestic violence is possible.