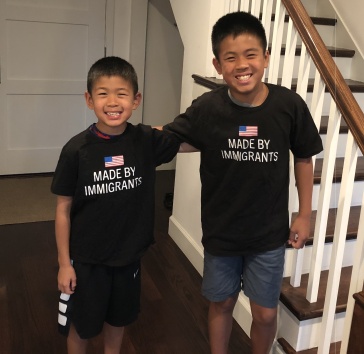 Recently, I came home to find that my husband had purchased matching T-shirts for himself and our two sons. They’re striking shirts with a bold American flag on the chest and the words, “MADE BY IMMIGRANTS” underneath. Though my initial reaction was a smile, I have to be honest, my heart stopped a little when I thought about our boys wearing them outside of the house.

It’s not because our family is not “made by immigrants;” we absolutely are. My grandmother-in-law came to this country as a servant, and though she spoke little English, she mastered American cooking and gained a reputation for making the best chocolate chip cookies. My own parents came to this country as graduate students at the height of the contentious Civil Rights era. Their early days of being American were symbolized by being asked which side of the restaurant they wanted to sit in — the “white” side or the “colored” side — and learning that they would have to create their own place. Our families’ paths to becoming American were not easy, and my generation is reminded of their values — every. single. day. They taught us that we all deserve a fair shot.

The T-shirts represented so many things to me — the pride of being an immigrant and pride in our family’s and our nation’s values. At the same time, they conjured other feelings–despair that we live in a time when this inherently American message has to be printed on a shirt, and sadness that, as a parent, I didn’t want my kids to wear the shirts without me next to them to protect and deflect any potentially negative sentiments. My many feelings about the T-shirts might not seem entirely logical or even reasonable, but, as parents know, instinct often transcends logic.

Our Foundation supported a study released last month by the Kaiser Family Foundation, which validated what many of us knew from prior research, that immigrant families were changing their behaviors — spending less time outdoors, changing places of work to avoid potential raid situations, and not seeking services — out of fear of jeopardizing their immigration status. Last month’s report sheds light on the exceptional hardships and heartbreaking decisions parents are making to protect their children after the deportation or detainment of the other parent.

The aftereffects of the sudden loss of a detained or deported parent include:

We also know that separation from a parent is a toxic stressor that can disrupt a child’s brain development, leading to lifelong mental and physical health issues. The health consequences are potentially enormous, contributing to everything from school failure and addiction to diabetes and heart disease. The love and care of parents is absolutely essential to the well-being of a child.

Further compounding and broadening these impacts is the Trump administration’s proposed rule issued on October 10, Inadmissibility on Public Charge Grounds. The proposed rule significantly expands the criteria by which individuals are evaluated for eligibility for green cards, the primary pathway to US citizenship. This rule affects not only those who are at risk of deportation, but also their non-immigrant and citizen relatives who will likely forgo needed health care and food rather than jeopardize a loved one’s green card application.

It is clear from the Kaiser Family Foundation research that this rule will have a real impact on thousands of California families whose health and well-being will be compromised as they opt out of food and health care services rather than risk deportation and family separation. In California, where half of our children have an immigrant parent, this rule would have widespread, negative, health effects throughout the state, an impact which will be felt for generations.

On the surface, the public charge seems to address the use of public benefits, but that’s one of many criteria. The proposed rule would create a set of undefined criteria that includes age, skills, assets, health, and family status, among many others. In addition, it would bend the rules in favor of the wealthy (250% of federal poverty level or above), whose green card applications will be weighted more positively, while penalizing poorer families, based on their contact with the safety net.

Collectively, these many additions to the criteria change the conversation from who is eligible to become an American to who is worthy of becoming an American.

Thinking back to my own family, I can’t help but wonder if we would have passed the proposed public charge test. Our families emigrated with little financial resources, but we had the benefit of sponsors and public benefits to support our stabilization which ultimately allowed us to pursue fair paths to citizenship. The benefits received by my grandparents allowed my parents to pursue higher education, give back to their communities and have children who have only amplified that impact. We continue to live the values of equity and opportunity because this country demonstrated those values towards our family. Because these are the American values we all aspire to.

At Blue Shield of California Foundation, our goal is for California to be the healthiest state in the nation with the lowest rate of domestic violence. We cannot achieve this goal if millions of California immigrants and their families cannot access healthcare and other needed services without fear of detainment, family separation or deportation. We believe that the proposed rule change will harm our state’s health by reducing access to services and creating an environment of fear and insecurity, which will lead to long-term, negative individual, family, neighborhood and community health consequences.

As for my boys’ “MADE BY IMMIGRANTS” shirts, my instinct was to tuck them away in a corner of a rarely used closet, thinking they could wear them “with supervision”. But I have been starkly reminded that this next generation is not the same as mine. This generation is growing up under different circumstances, having witnessed both Parkland kids and Dreamers rising up, they’ve had to find and live their values a little earlier, and they’re more than comfortable displaying those values, far more courageously than me. Which is why I shouldn’t have been surprised to find that they not only found the hidden shirts, but they wear them wherever and whenever they please.