Applying the lessons of one pandemic to another 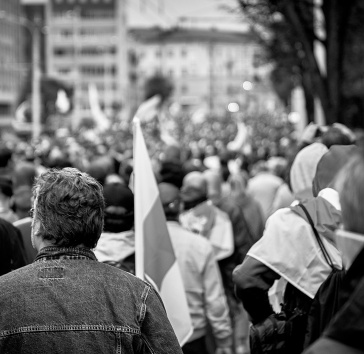 Forty years ago this summer, the Centers for Disease Control and Prevention (CDC) issued a one-page notice in the Morbidity and Mortality Weekly Report about a rare lung disease among five gay men in Los Angeles. “The occurrence of pneumocystosis in these five previously healthy individuals without a clinically apparent underlying immunodeficiency is unusual,” the editors wrote. A few weeks later, the New York Times published an article on a rare and fatal cancer seen among “homosexual men” in California and New York. Few people read those reports — and fewer understood that they marked the beginning of the global AIDS pandemic.

In those early years, I was a kid growing up just outside New York City. I learned of the AIDS crisis through local news about protests in the streets of Manhattan. Media coverage of the disease was rare and often sensational. But gay and transgender activists demanded attention through protest and fought for their city, state, and country to do more to help them.

As I grew older, AIDS became an undeniable fact of our world. But as it spread, social stigma and institutional discrimination continued to hinder the response. This injustice drew me to spend years of my professional life in the HIV/AIDS movement as a service provider, researcher, fundraiser, and board member.

The echoes of the AIDS crisis have been ringing loudly since the start of COVID-19 pandemic. Many people — from scientists to novelists — have noted the parallels between the two crises. As someone whose life and career have been deeply informed by the AIDS pandemic, and who is now immersed in the philanthropic response to the COVID-19 pandemic, I am bringing three particular lessons to bear on our work at Blue Shield of California Foundation.

Lesson 1:  The inequities exacerbated by the pandemic are deep and longstanding.

In the United States, AIDS initially hit gay and transgender communities the hardest — a fact that persists today. And even within those communities, there are stark disparities along lines of race and ethnicity. Black gay, bisexual, and other men who have sex with men, for instance, are more affected by HIV than any other group in the United States. These inequities don’t exist in a vacuum. They were and are rooted in deep structural discrimination that make these communities more vulnerable to the risks associated with HIV transmission and poorer health.

The very same thing has proven true with COVID-19. People in California’s Black and Latinx communities, especially those with lower incomes, have been more likely to contract COVID-19, as well as experience serious illness and death as a result. The reasons for this, now well documented, are tied to broader social inequities that place communities of color and of low income at greater risk for exposure but farther away from effective health care. The COVID-19 pandemic has not caused these problems — it has revealed them.

Lesson 2: Communities really do have the power to influence how the public and private systems address the crisis.

AIDS activist groups like ACT UP transformed how scientific research was conducted. As The Guardian has noted, many important and lasting “changes to research methodology were demanded by patients and their support groups, rather than by doctors or researchers.” Just as significantly, AIDS activists insisted on a seat at the table as local public officials decided how to fund and deliver HIV/AIDS services. They spent years fighting to embed the experiences and needs of communities most impacted by AIDS into public decisions. They created enduring structures that ensure shared decision-making between local governments and the people they serve.

Today, communities most affected by COVID-19 are demanding the resources they need through organizing and advocacy. In California, community-led organizations like Lideres Campesinas and PICO California have capitalized on strong existing networks to lift up the interests of communities of color and frontline workers disproportionately impacted by the pandemic. These groups are building broad coalitions to push for COVID-19 response resources to go to heavily impacted — and historically underserved — communities in our state.

Lesson 3: A global health crisis can shift our worldview … for the better.

The AIDS crisis drove affected communities to demand better from government, health care, and society at large. Over time, institutions and systems changed not just their practices but also their underlying worldviews about whose voice matters. That activism also paved the way for important gains in LGBTQ rights. To be sure, those institutional changes have not gone nearly far enough. It took decades to achieve legal gains that are still not experienced equally by all members of the LGBTQ community. But community responses to AIDS really did shift mindsets that led to positive changes in our nation.

We face similar opportunities with the COVID crisis. In California, community leaders, activists, and advocates are pushing for resources that create health, safety, and well-being for everyone. The chorus of voices calling out racial and economic inequality has grown louder — and our state and federal systems are responding. The response is halting and uneven, but positive change has already begun. And if we support communities as they continue to assert their priorities and needs, more will surely come.