How many spirits live in a BART station? And other questions about othering and belonging 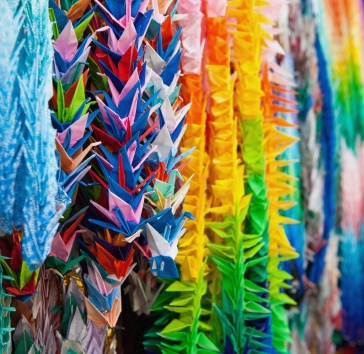 Earlier this year, I was late to work, flying down the stairs of the San Bruno BART station to the underground passenger area. The atmospheric rivers in the sky had filled the streets with water, slowing traffic, but I would have been late anyway. As usual, I had taken on too much work, both professional and volunteer. The San Bruno station is on the site of the old Tanforan Racetrack, which once confined Japanese Americans, mostly families, in horse stalls before they were sent to internment camps. This history, my family’s history, is documented in photo stories on the ground level of the station. I usually have a millisecond or less to reflect on that before I rush for the train.

As I descended the stairs, I could see an older man in front of me. He was hunched over, wearing plain khaki pants, a faded button-down shirt, a light jacket and a hat with a local hardware store logo. His form, his bent shoulders, and the way he clung to the handrail, reminded me of all the people I knew growing up — people who had done hard agricultural labor over a lifetime. He stopped at the landing and clapped three times. I was just about to pass him, when I heard the clap echo in the vast chamber and also, in my head and heart. Whenever my grandfather faced a challenge, he would clap three times and call the Shinto spirits, as if to say, See me, I’m here and I’m trying.

I stopped immediately and waited until the man was ready. I walked behind him, step by slow step, to the bottom. He didn’t clap again, we had made it. Shinto is the native Japanese religion. It focuses on appreciation and interconnectedness. Millions of Mari Kondo declutterers are performing a Shinto-like ritual as they thank their things for their service before throwing them away.

I boarded the train and wondered how I had almost forgotten one of my most visceral childhood memories — my grandfather, who was famous for his physical strength, clapping three times. How did I forget?

When I deboarded in San Francisco’s Financial District, I saw a throng of urgent office workers, pushing their way up the stairs because the escalators were out of service. I wondered how a busy crowd like that could see an old man struggling, let alone, make room for him, or anyone else who couldn’t keep up.

Directly and indirectly, these are the exact questions that were explored at last month’s Fourth Annual Othering and Belonging Conference, which the Foundation was proud to support as part of our strategic direction to make California the healthiest state by addressing the root causes of poor health and inequity in our communities. A sense of belonging and acceptance is important to both physical and mental health, but it can be compromised by social inequities and divisions.

john a. powell, Director of UC Berkeley’s Haas Institute for a Fair and Inclusive Society, which organized the conference, offered a powerful premise for belonging as health, "We need each other. We share the earth and our dreams. This is the expanding story of ‘we’."

The conference closed with an uplifting speech by William J. Barber II — minister, MacArthur Fellow, and political activist — whose Poor People’s Campaign has united disenfranchised low-income people across the country. If you want your hair to stand on end and feel the full passion of both moral outrage and social possibility, I encourage you to check out the video. When he finished, Jelissa Parham turned to me and said, “If you didn’t know, this is what it’s like to go to a Black church.”

So, how many spirits live in a BART station? There was at least one who helped me hear the echo of a clap, and there was another three months later at a different station. Once again, the skies were full of rain and I was running to catch a train, bundled under jackets and scarves. As I slid into a cold seat, I realized that the chill I felt was not caused by the rain, my sneezes were not from allergies, and my sore muscles were not caused by a weekend hike. I had a cold. I immediately thought of the man in the San Bruno BART station. Back at work, I told my awesome team members I needed help and together, we rebalanced my workload.

To me, the expanding story of “we” is about a convention center on Chochenyo land that can also serve as an ad hoc African American church. It is about a BART station where photo stories from the past evoke a sense of urgency about the present. It is about that deep sense of well-being that comes from a sense of belonging, and manifests as good health. It's about enduring connections to family, neighborhood, community, and culture. And most of all, it's about spirits in dark places who urge us to take good care of ourselves and each other.

Foundation staff who attended the conference shared their insights into belonging and its impact on our collective work to create a healthier, more inclusive California.

Jelissa Parham, Program Manager: "I am inspired to care for my fellow wo(man) in spite of any and all differences and to live through the idea that there is no me without you."

Lucia Corral-Peña, Senior Program Officer: “Who is it that we want to become? People are radically interconnected, so an abundance mindset is needed to cultivate a sense of belonging.”

Rachel Wick, Senior Program Officer: “I was deeply moved by Haben Girma and the beautiful images of her dancing, surfing, and feeling sign language, as well as her stories about the ways that each of us can think about and enable inclusivity by listening and seeing or imagining what’s possible. I love the idea that our differences — in her case, disabilities — can push us to innovate.”

Tina Jagtiani, Engagement Manager: “How do we define the word ‘we’? What is your ‘we’ and where do you feel like you belong? These questions really led to some introspective thinking about the places where I feel the most connected and other places where I might not feel a high sense of belonging.”

Jen Lewis-Walden, Senior Fellow: “I am compelled by the invitation to consciously choose inclusivity and foster belonging, and in turn, curious how we translate our insights into strategy, develop decision-making rubrics, and put the curriculum materials to work.”

Jacqueline del Castillo, Senior Fellow: “The idea of developing ‘just transitions’ really stuck with me. The journey from where we are now to a future that is incrementally more ‘just’ – moving from ‘extractive’ to ‘growing our own gardens.’”